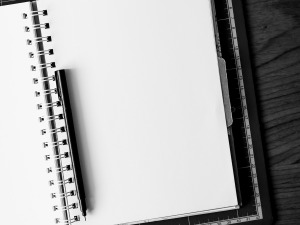 I hear so many people say “I hate writing,” to which I respond, “But, why?”

Even though I ask, I typically assume I already know the answer. It probably stems back to high school, or maybe even grade school. Resentment comes from years of being forced to adhere to the same templates, the same beginning-middle-end equations. Nothing is inspiring about writing for a test. And now that these products of the system are old enough to decide what they do and don’t want to do for themselves, they avoid writing at all costs. Each avoidance is a little jab at a past authority, and it’s still satisfying. (Please see, “projecting”.) Honestly, I didn’t enjoy writing in school either. That is until my first assignment in my college-level composition class.

But first, a quick side note: I didn’t even technically “make it” into that advanced English class. The pass or fail litmus test was a standardized, timed online test. (Shocking, right? And yes, it appears that old feelings die hard.) You can imagine such a thing would be pretty disheartening for a young prospective writer, and that it was. My nerd status was the only thing that secured me a spot in the class because, academically speaking, I was in the top 10% of my small class of under 50, which overrode my less-than-stellar testing score.

So I made it in, but what now? Would I be out of my league? Was I not meant to be there? Maybe I really wasn’t meant to be a writer, I thought.

On the first day of class, our professor, Mr. Nuthall, who could always bring positivity and excitement into a room, left me feeling a little torn. This class sounded pretty labor intensive, but it also sounded like a lot of fun, and possibly a great outlet for my creative energy. As nice as that sounded, there was no time to fantasize. We were given our first assignment. I really wish I could remember the exact assignment, but I have a terrible memory (sorry everyone I know). I think the prompt was something like, “Describe your experience in meeting a past or present pet for the first time. Use detail. Paint a picture.” I could be way off here, but I know that’s how my story started.

I finally got to write about something I was passionate about, and make it my own. No formulas, no template, just a prompt. I got to write about my cat/best friend Jasper, and how I knew he was “the one” at the SPCA the summer of my 12th birthday. (See picture of cute Siamese below. And yes, he’s still kicking!) 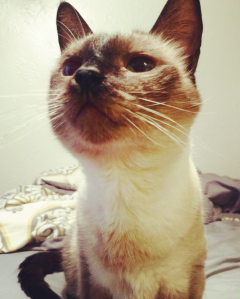 I went on to describe the initial connection, our relationship, why he was destined to be in my life, other sappy details, etc. I think I got a “B” on that paper, to which my inner perfectionist screamed, “NO!”, but it reaffirmed that I did indeed belong in the class. And regardless of that letter grade, it was as if a new door had been opened: I could write about what I cared about. Writing didn’t have to be stiff and boring. Writing could be whatever I wanted it to be.

Jules Renard once said, “Writing is a way of talking without being interrupted.” Where else can you get that luxury? So I urge you to write. Write a sentence, a haiku, write about what you see, what you think, write about others. Your words will be here long after you are. Write for you. Tell a story, because at the end of the day, stories are all we have.